Miressi, Sabbioni, Martinenghi, the CEO of Isl, Di Nino, Fioravanti and Beccari on the Belvedere of Nisida

A day of rest used just well, for the sake of good. The champions of the International Swimming League, engaged in the Champions of swimming in Naples for the first phase until the end of September, have made a special mission: to meet the boys of the Nisida prison. The delegation of the bluest team, the Aqua Centurions, lived a truly different day by exchanging experiences, life stories, training courses. “Two apparently different worlds that we wanted to put in contact to make children understand what a spirit of sacrifice means. The real value is the ability to relate, dialogue, find oneself through paths that have a lot to say to each other ”said the director of the juvenile prison of Nisida, Gianluca Guida at the end of a visit that went beyond the normal patterns. “It was like a meeting between boys and it was hard to hug each other when we said goodbye” the thought of Nicolò Martinenghi who is 22 years old just like some guest of the Neapolitan juvenile prison. “It is certainly a visit that has given more to us than to them – he continues – we have seen some guys we often hear about who have a great desire for social redemption. Sport can give it to you. The important thing is that we create an after Nisida. When they get out of here. With all the experiences they have had and with what they have learned, many of them have expressed the desire to change pace. We must accompany them on this path “. 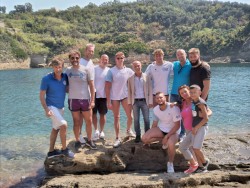 The champions with the boys of the Nisida prison

A day, for eight boys from the Neapolitan institute, spent between the sea of ​​Porto Paone and the canteen of the historian Don Peppino. Side by side now in the water to learn the secrets of the back with Simone Sabbioni, several times world medalist, those of Alessandro Miressi’s freestyle, silver and bronze at the Tokyo Games, those of the breaststroke by Nicolò Martinenghi, also twice bronze in Japan. “I have to tell the truth that they do well in the water – Miressi thought – but it was above all nice to interact with them. Basically we are the same age “. For Simone Sabbioni “we understand that everyone has a great desire for redemption and the important thing is not to leave them alone”. 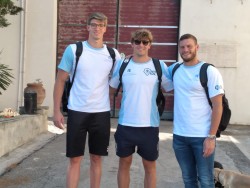 Leading the Aqua centurions patrol Domenico Fioravanti (the general manager and blue biolympian) and Andrea Beccari. “It was important – they say – such a relationship. As much for us as for them. We are lucky because we also live in well-off contexts and often forget what is around us. I was pleased to see that some have also followed the Olympics. It means that we are an example for many. “International Swimming League wanted to create this relationship because it firmly believes that this Neapolitan stage is not just swimming, but also the opportunity to get to know the city in all its aspects, from sports to playful and tourist aspects, to social ones and this is only the first of a series of initiatives that we have planned. Today we have all learned a lot and I am proud to have guys like Niccolò – Alessandro and Simone in Isl ”the words of Andrea di Nino, manager of Isl and creator of the meeting. And a promise also arrives on the lookout: the boys from Nisida will go to the Scandone pool to cheer on their new favorites with whom there has been a natural empathy.

The swimming champions of Islam visiting the young prisoners of Nisida: other emotions