Hurrah! Despite the flood of new records emerging during the pandemic, we have one above average. She is phenomenal and has been waiting for six long years. Dead Sara, meanwhile, was definitely not bored, and despite the lack of inspiration for singing on the album “Ain’t It Tragic”, they finally managed to put it together. How is?

Dead Sara are back. Finally. It’s been about six years since we’ve been blessed by their second line-up, “Pleasure To Meet You,” which, by the way, has not lost its power to this day. Finding the successor to one of the best punk-rock (and genre-related) recordings of the past decade is not easy. Maybe she could have the nine then. At least in addition to the news.

The explosive group around the angry singer Emily Armstrong and her faithful companions, guitarist and back vocalist Siouxsie Medley has meanwhile only become a trio from the quartet. When the pair of former Skrillex teammates from the days when the later dubstep icon was still playing metalcore, bassist Chris Null left. The trio is complemented by only one witness, drummer Sean Friday. But does this mean that the formation would be missing something? No way! The band has probably had a more complicated period, disagreements with the label, the release of the aforementioned album duo on its own label and the subsequent transition to Atlantic Records and later to Warners are a thing of the past and the same applies to the six-track EP “Temporary Things Taking Up Space” 2018, which could not have a better name. It’s not bad, but it exactly fulfills what you would expect from an EP – clippings and loose sketches that would make points to regular studios. And so, this year, the third album “Ain’t It Tragic” was finally released. And she’s fantastic. Again.

To begin with, it is necessary to redefine itself against Paramore. No punk-rock band with a lead singer can avoid a comparison with them, but even this time it would be out of the question. Look more towards Marmozets, Blood Red Shoes or Hole. Dead Sara are angrier. Dirtier. More musically layered. And if two can show you instead of one middleman, they will. The huge amount of energy that comes from their music will reliably kick anyone who might want to doubt that this bunch doesn’t know what they’re doing. Does he know. He has a clear goal and is pursuing it. It is not enough for its members to put one detonator after another on the album. They want you to recognize them safely. And they don’t need an army of producers and hard drives full of electronic buzz to do that. No. They have ideas. Lots of ideas. And when one song starts somehow, it doesn’t mean it ends the same way. Much more often, they will graduate after each chorus, increase the tension and add vocal tracks over each other so that they almost blow your brain out of your head. Like in the “Heroes” piece. One of the best things they’ve done so far. And in which the brutality and desire to rip out your lungs go to the maximum. It’s just better not to watch the clips in their case, they don’t do well for them and the power of the songs themselves is easily lost in them. Nervous tapping of the feet awaiting further development, however, will also be guaranteed by the “Starry Eyed” opener. “Nothing in life comes easily!” Emily shouts into the microphone and you believe her. Because you know that it’s true and that a Los Angeles strike will not serve you like slogans scared and gloved, but pretty raw. “Do we all kill ourselves just to feel at least a little human?”, shouts in the following “Good Times” and you can see again that even though the song has a positive vibe and a swing in the chorus, you will find nothing but depression and the struggle with inner demons in its lyrics. Drugs, death, helplessness, contempt. These are the themes of their texts. And it’s great that they manage to explore them over and over again and not do it again. Neither lyrically nor musically. 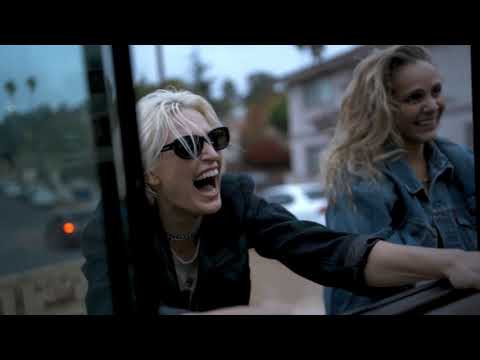 But describing what will happen in other songs could almost be considered spoilers for all who want to discover their genius themselves. Like “Lover Stay Wild” … Oh … Well, just listen to it. And we’d better end the review by expanding the target audience beyond punk rock and fans of the bands mentioned above. So like this – if you like when the songs have multiple layers and you can still discover something new in them, and the logic of things is why you like the last albums Biffy Clyro, Enter Shikari or Don Broco, it’s quite likely that you’ll be caught underestimated and still still poorly known group called Dead Sara. Is that enough?

REVIEWS: Dead Sara is again one of the best albums of the year thanks to “Ain’t It Tragic”