I must admit, I love me some Lana Del Rey.

Well, not Lana specifically as a person. I’ve never met her and have zero personal knowledge of her. But I do love her music and the heartwrenching lyrics of her songs.

So it was troubling when Del Rey’s music came under intense media scrutiny as the #MeToo movement ignited in October 2017 due to speculation about the nature of her relationship with former producer and convicted sex offender Harvey Weinstein.

Now the gossip is spreading again on TikTok, as a woman using the handle FluentlyForward posted a video in which she offers some correct, some incorrect and some unsubstantianiated information about the “Cola” controversy.

Are the lyrics of Lana Del Rey’s song “Cola” about Harvey Weinstein?

Though she has since said otherwise, sources close to Del Rey initially denied any link between the lyrics of her 2012 song “Cola” and Harvey Weinstein.

TMZ reported at the time, “They say the actual lyrics go this way … ‘Ah he’s in the sky with diamonds.’ We’ve checked the album’s digital booklet … and the lyrics reference ‘Ah he’s,’ not ‘Harvey.'”

Del Rey, 36, whose real name is Elizabeth Woolridge Grant and who has also released music under the name Lizzy Grant, had yet to give a direct response confirming whether or not her lyrics specifically reference Weinstein, although in the past she has explained that the reference to tasting “like Pepsi Cola” is a nod to her then-boyfriend Barrie-James O’Neill, of the band Kassidy.

“I have a Scottish boyfriend, and that’s just what he says!” she told Rolling Stone in 2014.

But back to Harvey, ever the dedicated journalist, I took a listen to the song again for myself, as you can do right now.

My hearing certainly is not 100%, but if she isn’t singing, “Harvey”, I’m not even sure what my own first name is (read as: she definitely says “Harvey”).

RELATED: 13 Things To Know About Lana Del Rey’s Fiancé, Clayton Johnson, Who She Met On A Dating App

Oddly, as noted on a Reddit thread devoted purely to figuring out the truth about this song, the lyrics not only appeared differently across websites such as AZLyrics, Genius, MetroLyrics and Google, but those several appeared to have been changed when compared with cached versions found on The Way Back Machine just a few days earlier.

The version on now defunct MetroLyrics is now gone from the internet, but while a cached version crawled on September 24, 2017 shows Harvey, the next crawl on October 16 — one day after TMZ’s article denying the connection was published — reads “Ah he’s.”

On October 7, 2017, Genius transcribed the lyrics including the reference to Harvey shown here. 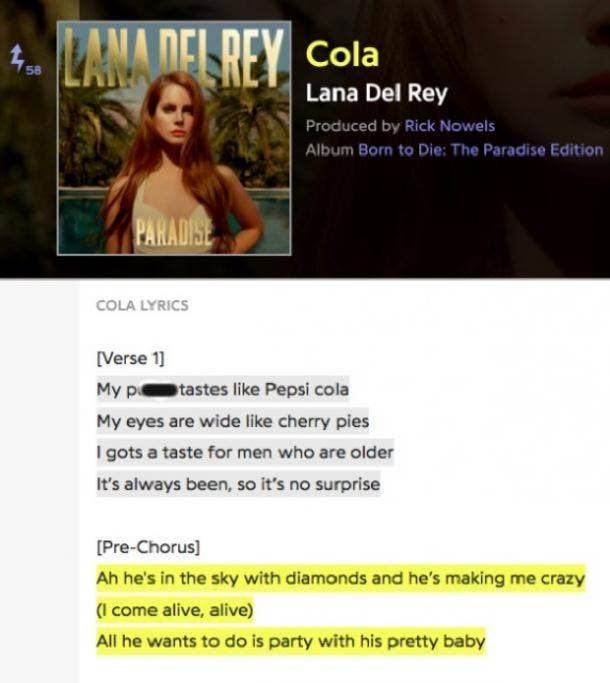 Genius has since clarified the matter, adding an annotation mid-lyrics that reads as follows: “Upon the songs release, the lyric ‘Ah, he’s in the sky with diamonds’ was transcribed by Genius contributors as ‘Harvey’s in the sky with diamonds.’ The lyrics were later changed to ‘Ah, he’s’ to reflect the official lyrics listed in Born To Die: The Paradise Edition and Paradise EP digital booklets on iTunes.”

It feels like a stretch to say the lyrics were changed only to match the official lyrics given the timing of the change coincides so perfectly with the timing of the backlash against Weinstein and his enablers, but there’s obviously no way to prove or disprove their reasoning.

Interestingly, own Google search back in October 2017 also backed up what my own ears still tell me they hear in that song. 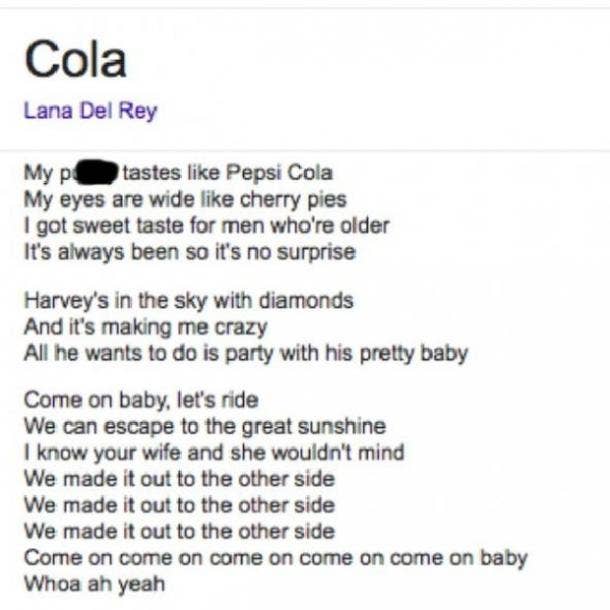 But looking again today, now nearly four years later, and Google has chosen to display the lyrics as “Ah he’s” as well. 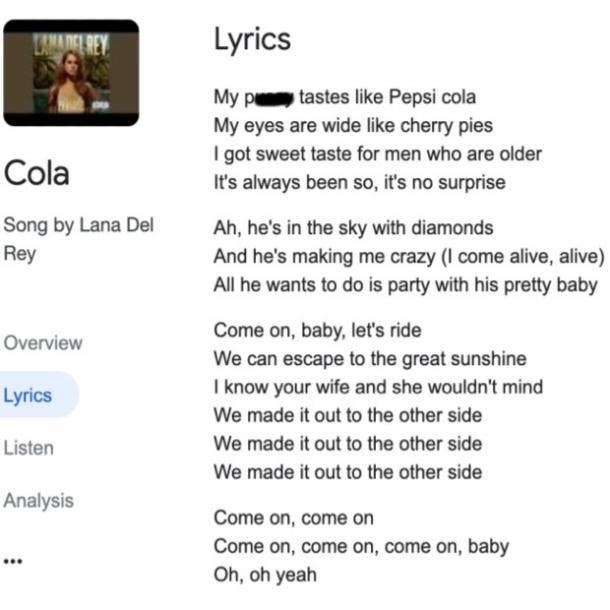 In November 2017, Del Rey clarified that there is at least some connection between Harvey Weinstein and the Harvey referenced in the lyrics of “Cola.”

“When I wrote that song, I suppose I had like a Harvey Weinstein/Harry Winston-type of character in mind,” Del Rey told MTV News. “I envisioned, like, a benevolent… diamond-bestowing-upon-starlets visual… I thought it was funny at the time, and I obviously find it really sad now. I support the women who have come forward. I think they’re really brave for doing that.”

She also confirmed that she planned to retire the song.

RELATED: 8 Of The Most Alarming Harvey Weinstein Sexual Assault Details And Allegations

What is the nature of Lana Del Rey and Harvey Weinstein’s relationship?

Del Rey and Weinstein were first linked in May of 2012, not in 2017 as stated in the TikTok mentioned above.

An article in The Sun claimed Weinstein was overheard at that year’s Cannes Film Festival telling the then-budding music star, “The camera loves you.”

An unnamed source shared these details at the time: “Harvey thinks there’s something about Lana. He knows all about her music but believes she’s got what it takes to be a film star. She’s got the looks and a stage presence which he thinks will transfer well to the big screen… Critics have even claimed that the star plays a part all the time as Lana.”

In August 2019, Steven Gaydos, Senior VP Global Content and Executive Editor at Variety tweeted a photo he captured of Weinstein watching Del Rey as she performed at a party in Cannes that same year.

In July 2012, Lainey Gossip caught wind of a lunch date Weinstein and Del Rey shared at Parisian restaurant L’Avenue, their departure from which was caught by papparazzi.

It appears Lainey Gossip knows their stuff, as their take on Weinstein seems remarkably accurate in what we now know has been reported by multiple women as his standard M.O.

Del Rey, they wrote, “was spotted in Paris with super producer Harvey Weinstein (they are both there for fashion week)… So Lana and Harvey go for a heavily-papped lunch where she posed all pouty and demure in an ill-fitting blue dress and he pawed her in front of the cameras.”

“But there’s no telling Harvey to f-ck off: he can be and say whatever he wants.” they continued. “Because Harvey makes movies — successful, Oscar-baiting, artistic movies — that fledgling starlets want so badly. Even to read one of Weinstein’s scripts must come at a price. Lana will have to do more than wear some frilly Marchesa gowns.”

While Del Rey did not end up appearing in a film as of yet, director Tim Burton selected her song “Big Eyes” as the title track for his 2014 film of the same name, and also included a second song, “I Can Fly”, on the film’s soundtrack. While the film was not produced by Weinstein (another error in FluentlyForward’s TikTok video), The Weinstein Company was responsible for its distribution.

When “Big Eyes” was nominated for a Golden Globe Award in 2015, she pointed to Weinstein as the origin of her involvement in the project in an interview with The Hollywood Reporter.

“‘Because he knew I loved Tim Burton, Harvey said, ‘Why don’t you write a title track, something with the chorus of ‘big eyes’?’ Del Rey recalled. ‘Tim was nice enough to listen to it, and he liked it.'”

All of that said, again in opposition to the statements made on TikTok, it by no means “pretty much confirms” that Del Rey and Weinstein had either a romantic or sexual relationship. The truth is, we just don’t know the truth.

While some people have speculated as to whether another Del Rey song, “Put Me In A Movie,” might also be a reference to Weinstein, this rumor appears to be false.

The lyrics are certainly evocative of the Weinstein’s purported casting couch, and the video below does seem to capture the same concept.

But… this song was written and recorded in either 2007 or 2008 and released in 2010, years before her first meeting with the Miramax giant.

And the video above is a fan-made version.

The official video for the song made by Del Rey is uploaded on her Lizzy Grant Vevo channel rather than on her main Lana Del Rey channel.

The icing on the “Cola”-is-probably-about-Harvey-Weinstein-and-not-just-about-men-like-Harvey-Weinstein cake may possibly be statements Del Rey made during that same 2014 interview with Rolling Stone.

Speaking of her proclivity for intense, passion-drive relationships, she said: “It’s been beautiful… But it’s been confusing, because when that’s your prerogative, things don’t end in a traditional way. You don’t have that traditional relationship where maybe you go out with couples at night, or you do normal things. It’s more of an extension of the creative process. There’s high-impact events that happen, or big adventures, or big fallouts. So it’s inspiring, and it’s not grounding, but it’s what I need to keep going.”

RELATED: Harvey Weinstein Is Using A Legal Strategy Similar To Bill Cosby’s — Could He Get Out Of Jail Too?

More for You on YourTango: