Japanese Crown Princess Kiko, on the occasion of her 55th birthday on Saturday, said she wants to “respect as much as possible” the feelings of her eldest daughter Princess Mako, whose marriage has been postponed for nearly three years following reports of a money dispute involving her boyfriend’s mother.

“There are things that we agree and disagree on, but we want to tell each other what we think is necessary, and I would like to respect my eldest daughter’s feelings as much as possible,” the crown princess said in a statement released by the Imperial Household Agency.

Photo shows Crown Princess Kiko at her residence in the Akasaka Estate in Tokyo on Aug. 23, 2021. (Photo courtesy of Imperial Household Agency)(Kyodo)

Princess Mako and her commoner boyfriend Kei Komuro, both 29, are looking to register their marriage in October and start a new life in the United States, where Komuro currently resides and is expected to start working at a law firm, a government source has said.

The couple announced their planned engagement in September 2017 and the agency later said their wedding would take place on Nov. 4, 2018, but the event was postponed following a string of reports that Komuro’s mother was involved in a financial dispute with her former fiance.

In the statement, the crown princess said, “As a parent, I am having many conversations with my daughter so that I can accept her feelings and thoughts,” but did not touch on specific discussions they had or the outlook for the couple’s marriage plans.

She also refrained from commenting on what she thinks of the Komuro family’s handling of the financial matter. The former fiance of Komuro’s mother claims the mother owes him over 4 million yen ($36,000), including money spent on Komuro’s educational expenses.

In November last year, Crown Prince Fumihito, the younger brother of Emperor Naruhito, said he “approves” of the couple’s marriage while suggesting that the money issue requires more visible efforts by the Komuros.

In April, Komuro said through his lawyer that he plans to make a payment to his mother’s former fiance to settle the money dispute, but there has been no progress since then.

Amid public unease about the couple’s marriage, Princess Mako will likely decline a lump-sum payment of up to about 150 million yen usually given to female royal family members upon their departure from the household and skip traditional rites for marriage, according to a source familiar with the matter.

Crown Princess Kiko also touched on the future and the possibility of marriage for her 26-year-old second daughter, Princess Kako, in the statement, saying, “I would like to hear (her) thoughts carefully and cherish family talks.” 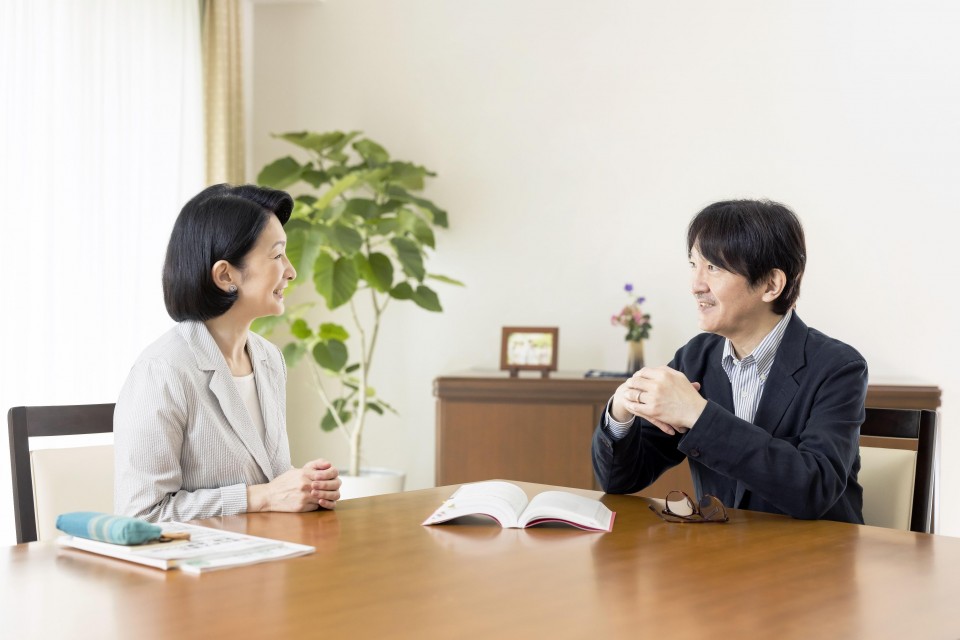 Crown Princess Kiko (L) sitsing with Crown Prince Fumihito at their residence in the Akasaka Estate in Tokyo on Aug. 23, 2021. (Photo courtesy of Imperial Household Agency)(Kyodo)

Crown Prince Fumihito was formally declared first in line to the throne in a traditional ceremony held in November last year. The couple’s son, Prince Hisahito, 15, is currently second in line and the only heir of his generation.

The crown princess vowed to continue supporting the crown prince while expressing her willingness to respect Prince Hisahito’s decision on which school he wants to attend after graduating from Ochanomizu University Junior High School.

As Japan continues to grapple with surging coronavirus infections, the crown princess said, “I have spent the past year worrying about the difficulties and hardships that many people are going through,” while expressing her gratitude to health care workers.